If you are an artistic or creative person, then using the soon to be explaining technique is definitely a good idea for creating your very own animation, making your art come to life. This can be achieved through drawing a collection of sequential images, essentially creating a cartoon style storyboard which when motion is applied will simulate real life movement. 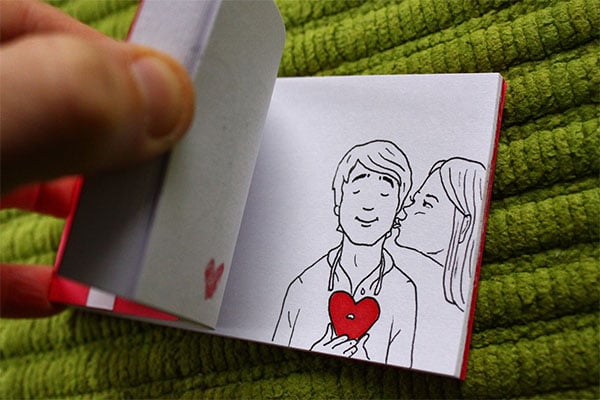 This is an example of a flipbook, where a series of images are collected sequentially, then skipped through at speed to generate real animation. This is a creative idea which was originated in the 19th century as one of the first forms of animation. To this day it can be used by budding artists to portray a given scenario or tell a story. Often this approach has been used in recent times with superhero style stories, but you can essentially create your own story over a series of images and really bring them to life with a flipbook. There are many different appropriate styles which can be applied to the flipbook, where it is very simple to create your own animation for genres such as comedy, thriller or simply anything which is intriguing or interesting to skip through. With modern technology it is also possible to do computerized designs or even sketch on your computer itself. This can be used to create a computerized storyboard, where you can then print out various images you have created, ready to assemble a flipbook. In the next paragraph a situation will be described where you can hand draw images to create an authentic flipbook without the use of computers, such as this incredibly creative example

This puts your artistic skills to the test, whilst also generating real animation from what would otherwise just be still images.

This idea involves telling a thriller style story through a series of images, making the most of high contrast colours which really set off the story in a vibrant fashion. Kung-Fu is a very popular theme for excitement throughout history, so by creating a story which sees someone going through various fight scenarios; this will make an interesting flipbook to skip through. By enthralling the viewer with samurai sword scenes and lots of red colour, this will attract the viewer and intrigue them to skip through and want to view it again and again. This will really put your artistic skills to the test, but through care, patience and consideration it is possible to achieve a breath-taking effect.

Share:
DanielRossiter
The author of this article has been working in design and marketing for the past 10 years, he recommends using FotoMaster for all of your picture flipbook needs and requirements.
More articles by DanielRossiter

How Can You Improve Your Design Skills?
5 Ways Designers Сan Overcome a Creative Block
Choose Your Free Halloween Wallpaper: The Best Ones for 2021
100 Free Halloween Facebook Covers – Make Your Friends Green with Envy [Updated]